Absent between March and November 2021, Deko de Tilou (9) has just shown a clear recovery in form, triumphing with authority in a Quinté+ at Vincennes. Very comfortable in Cagnes and ideally located on the edge of retreat, this resident of Vincent Martens finds an opportunity to double down.

Recent winner on this same course, Eagle Eyes (4) will form the opposition with Faithful (8), which left many regrets to its takers during its last attempt here. Only preceded by the all good Evariste du Bourg lastly, the very fit Mystical Spirit (10) can overcome his handicap of 25 meters, like‘Eden Basque (12), in his garden in Cagnes, and Baron du Bourg (15)at the start of one of his last races in France.

On a good day, Elan Baroque (7) keep your chances for a place with Filou l’Auvergnier (6), newcomer in the boxes of Yannick-Alain Briand.

The starters in detail and the opinion of the pros

While he had made a victorious debut at Cagnes on January 12, this representative of Jean Luck’s silks did not confirm during his last two outings, on the course that interests us. In this Quinté+, it will especially interest fans of gamble.

Esteban Jiel (1) stayed in good shape but tackles a well-composed field. He will have the advantage of starting at the first level this time, but his task will not be easy. He will have to benefit from a very favorable course along the rope to hope to take a small place at the end of the combination.”

A new recruit for Jean-Marie Roubaud, this 9-year-old gelding will be treading the Cagnes-sur-Mer track for the first time. Discreet this winter on the Parisian ash, this outing will undoubtedly allow his mentor to better understand his current possibilities.

“Duke of Christal (2) He’s been at the team for about a month and he’s shown us his form from his first jobs, even if he’s not impressive. He will probably be more comfortable on the speed courses but I still think he is competitive for a small place on this distance, if he benefits from a favorable course.”

Since his sixth place at the end of November in a Quinté+ at Vincennes, this son of Blue Dream has recorded four consecutive disqualifications. A newcomer to the boxes of Jean-Marie Roubaud, he will stay on the rails for his first test at Cagnes. Without us.

“Like my other representative, Domino Dream (3) recently arrived at the stable. He needed to take the pressure off and is now calmer at work. He will remain shod and this test will mainly aim to give him confidence. Difficult in his conditions to grant him credit.”

Dressed in the Pilarski jacket, this son of First of Retz no longer has to prove itself on the Côte d’Azur. Recent easy winner on the course that interests us, it is moving up in category but should still sell its chances dearly.

“Eagle Eyes (4) remained in good form but the opposition is tougher this time. He can adopt all the tactics and will still have the advantage of starting in the lead. If he stays diligent, he has his place on the podium.”

While discovering the Cagnes track, this Scandinavian trotter could not play the slightest role on February 2 in a Group 3 contested on this same course. He is aiming a little lower here and will try to play the spoilsport.

“Speedy Face (5) should not be condemned too quickly. His trainer did some analysis after his last race at Cagnes and the horse wasn’t perfect. Everything has been back to normal since. We are not worried about the distance. The entry is good at the first rung and we think that it can grab a place in this Quinté+.“

Fourth in the 2019 edition of the Critérium des 4 Ans, this son of Real de Lou no longer evolves at the same level. Passed from the boxes of Franck Leblanc to those of Yannick-Alain Briand at the beginning of the year, he has just shown himself to be at fault at the start on this same course. Where is it?

“Filou the Auvergnier (6) was quick to fault last time out and had previously been unlucky. He is quite tense at work and we try to calm him down so that he becomes a little more manageable. We are a bit in doubt right now. On its best value, its place would be in the right combination but difficult to predict in advance its behavior.

Author of a remarkable end to the race here on January 20 after a bad start, this resident of Loris Garcia has not been unworthy recently in a Group 3 on this course. Well placed in the lead, he will have supporters.

“Baroque Moose (7) needs a course to the economy to give its maximum. It starts well and is quite practical, which should help us have a good leader’s back. He stayed in good shape and I think he is capable of grabbing a place in this event.”

After having been slow to express himself, this representative of Louis Baudron left regrets to his takers during his last attempt on this same track. Pleasant winner at the end of December on the course which interests us, it deserves to be redeemed.

Gwenn Junod, manager of the Baudron stable in Cagnes

“Faithful (8) was unmarked by his last outing where he was unlucky, only finding the opening too late. He was unmarked by this run. He is currently in good shape. It can adopt all tactics and should logically play a leading role in this Quinté+.”

Absent between March and November 2021, this resident of Vincent Martens has just shown a clear recovery in form, triumphing with authority in a Quinté+ at Vincennes. Very comfortable in Cagnes and ideally located at the limit of the decline, he finds the opportunity to double the bet.

“Deko de Tilou (9) did not miss his goal recently at Vincennes. It has remained in good condition and is back in its garden. Even if it is very efficient over short distances, it has already had the opportunity to behave well on the holding courses. He is ideally engaged at the first rung and once again has his say for the podium.”

Brilliant winner of the Prix de la Côte d’Azur (Gr3) in mid-January, this resident of Nicholas Ensch only found the very good Evariste du Bourg to block his way to success during his last attempt. Although forced here to return 25 meters, it remains to be watched.

“Mystical Spirit (10) will remain shod in this event but it has already had the opportunity to behave well in this way. His latest releases are all good. With this performance of distance, his partner will have to be inspired because his task will not be easy. If he is preserved during the course, he is able to put his good burst of speed to finish and, why not, grab a place.

Discreet for his two winter attempts at Vincennes, this Scandinavian trotter will discover the Cagnes track here. Endowed with staying power, it should appreciate this course and is not incapable of clouding the issue.

“The last outing of Velvet Gio (11) does not reflect its value. I find him in good shape in training. He is coming down in category and the long distance will be better for him. I hope it will be able to take a good place in this Quinté+.”

With the exception of his failure on January 13 in the Prix de la Côte d’Azur (Gr3), this resident of Nicholas Ensch held its game well this winter in Cagnes. Although shod at the start of this Quinté+, it does not seem out of the question for a place.

“Basque Eden (12) will have to benefit from the same course of the race as during his last outing to hope to make the finish. The field is less raised but it cannot afford to make the fort during the course. It’s up to Romain Derieux to play and drive him to the millimeter to try to grab a small place”.

Tenth in this same event in 2020, this resident of Michael Lenoir hardly convinced this winter on the Côte d’Azur. Bad start during its last two outings, it will have to set off on the right leg this time if it wants to hope to be talked about.

Mike Izzo, manager of the Lenoir stable in Cagnes

“Christo (13) laughed at me initially on his last two outings. His trainer made the trip to try to set the record straight, especially in the first few meters of the race. The horse is in good condition and even if he has to go the distance, he has the means to grab a good place in this event.”

Specialist in mounted trotting, this resident of Benjamin Goetz has not been seen driving since its failure on 4 August last in a Quinté+ at Enghien. Ferré here, he seems faced with a very delicate task.

“Larre Diamond (14) is currently taking advantage of the sun in Cagnes to maintain his physical condition. He is now essentially a ridden trotting horse and this test will benefit him for his next engagement under saddle.”

Sixth in the Prix de la Côte d’Azur (Gr3) on January 13, when he was already forced to return 25 meters, this 11-year-old gelding will compete here in one of his last races on our soil. Presented with freshness, it deserves a note of suspicion.

“The last race of Baron du Bourg (15) is good because it took us a long time to find the opening. Despite his 11 years, he is still in good physical shape. Its task will not be easy at 25 meters but I am certain that it will still give its maximum and that it is able to grab a place in this Quinté+.”

Easy winner at Agen on January 19, this resident of Jasmine of Flora had a more laborious end to the race recently at Vincennes, on the occasion of the Quinté+ Prix de Langeais. Already seen to his advantage on the course that interests us, a surprise on his part cannot be ruled out.

Walnut Diablo (16) has been back home for a good week and quickly got back to his usual routine. He no longer has any margin at this level when returning the distance but he is still in good condition and still has good spirits. It has often held up well in this style of event in our region and its place is once again in Quinté+.” 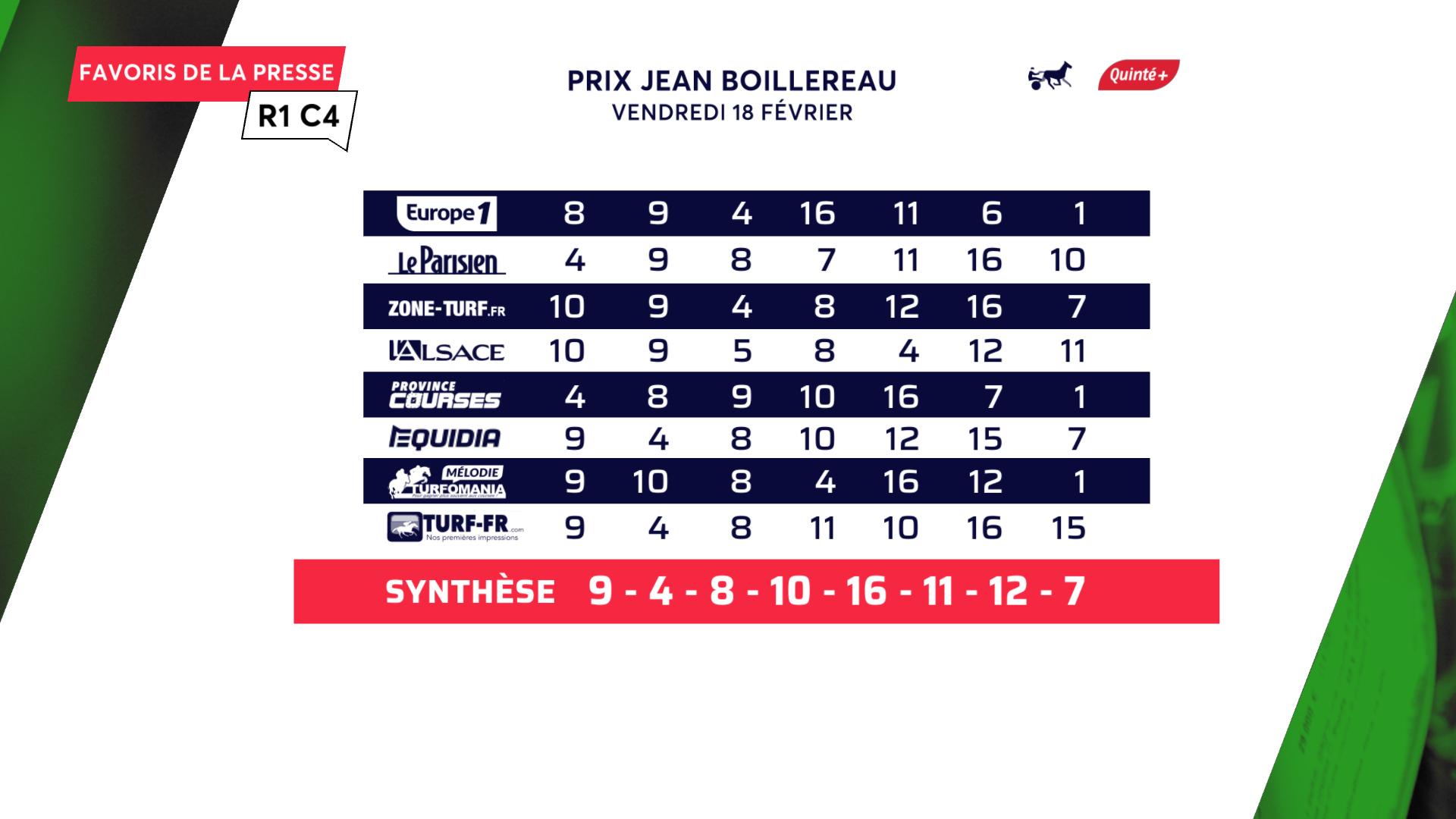 The stat of the day

eagle eyes had flown over the Quinté+ of 26 January on the same runway. The resident of Nicholas Ensch could well renew the operation this Friday. However be careful adversity is more raised this time.